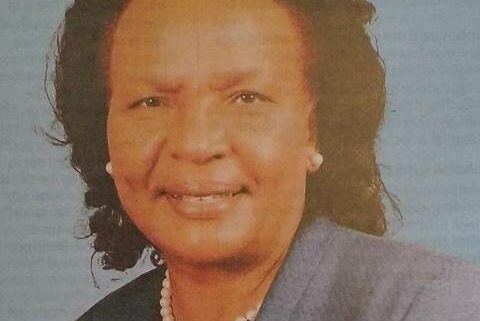 It is with deep sorrow, and in humble acceptance of God’s will, that we announce the passing on to glory of Mrs. Esther N. Mukuria, which occurred on Monday 26th December 2022 at The Nairobi Hospital.

Esther was the beloved wife to the late Walter B. Mukuria, and loving mother to the late Ian Mukuria, Cynthia Nduta Mukuria, Kevin Karanu Mukuria and Denise Mwende Karanu. A doting grandmother to Nduta Mwaura, Githua Mwaura and Wanjiru Mwaura.

Family and friends will be meeting at St.Andrews PCEA Church (Old Church, behind Church Hall on Wednesday 28th December 2022 and Thursday 29th December 2022 from 4.00pm.

The cortege will leave Lee Funeral Home on Friday 30th December 2022, and gather for a celebration of life service at St. Andrew’s PCEA Church at 10.00am, after which her remains will be interred at the family gravesite at Lang’ata Cemetery.

Should one wish to support the family as we prepare to lay our mother to rest, kindly channel your contributions through: Paybill Number: 8103162 (Esther Mukuria Farewell), Account Number: Your Name