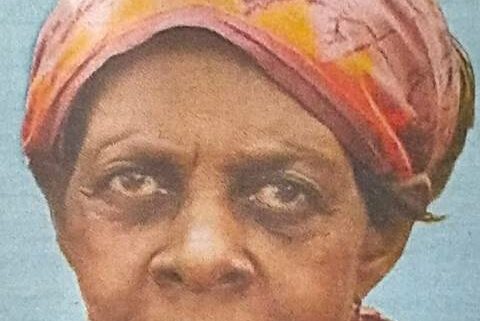 It is with deep sorrow and acceptance of God’s will that we announce the passing on of Mama Lucy Wambui Macharia formerly of the defunct City Council of Nairobi (Parks Department). Born in 1949 at Mukurwe- ini Nyeri County. She passed on, on the 18th of January 2023 at St Mary’s hospital Langata after a long illness.

Daughter to the late Isaac Macharia Kamau and the late Mary Wangui Macharia.

Family and friends are meeting at Kikuyu Kabete Kanyariri, Muthure Village near St Anne’s Muthure Catholic church and at Githurai Kimbo, Mwihoko next to PCEA Tumaini church. Meetings commence from 4:30pm every evening.

Revelations 14:13- then I heard a voice from heaven say, write this: “blessed are the dead who die in the Lord from now on.””Yes, says the spirit, “they will rest from their labour, for their deeds will follow them.”