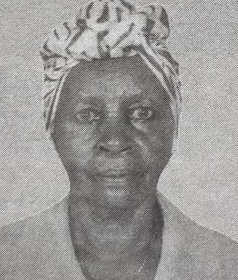 It is with deep sorrow that we announce the death of Agnes Mueni Kamau, which occurred on 12/04/2021.

Mother-in-law to the late Catherine Mumbua and Kennedy Malenya.

The cortege will depart from Montenzuma Funeral Home – Machakos – at 9:00am on 22/04/2022 for the funeral ceremony and the burial which will take place at Kyumvi, Makutano Machakos County.

May her soul rest in eternal peace.

2nd Tim 4:7 —”I have fought the good fight, I have finished the race and kept the faith.“