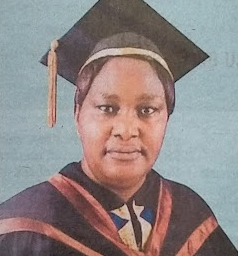 It is with humble acceptance of God’s will that we announce the demise of Ann Wanja Mwambi which occurred on Tuesday, 05/04/2022 after a short illness.

Daughter of the late Samuel Njami and Mary Wangari Njami.

The burial will be on 12th April 2022 at Anpet Academy Gema, Gilgil.

2 Cor 5:1- For we know that if the earthly tent we live in is destroyed, we have a building from God, an eternal house in heaven, not built by human hands.