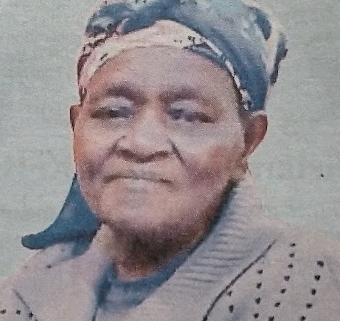 We the Family of the late former Councillor Solomon Muriithi Muthui, wish to announce of the passing onto glory of Mrs. Catherine Watare Muriithi, on Tuesday 29th March, 2022.

Daughter to the late James Karuri and the late Mary Wangui Karuri.

An Aunt, Grandmother and Great-grandmother to many.

Friends and relatives are meeting daily for Prayers at her home in Rumuruti, Laikipia County.

The cortege will leave Benedict Funeral Home at 8:00am for Funeral and Burial at her farm at Heshima Estate – Nyahururu – on Wednesday 6th April, 2022.

In Gods hands you rest and in our hearts your memories remain forever.