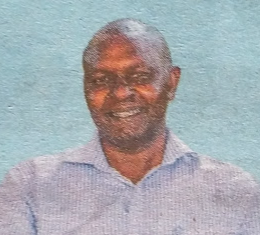 It is with acceptance of Gods will we announce the sudden demise of Charles Ndunyu Ndirangu which occurred on 22/03/2022 after a short illness.

Charles was a son to the late Samson Ndirangu and the late Elizabeth Kagure.

He is survived by his Loving wife Lucy Njeri, his children Samson Ndirangu, Maureen Ndirangu and Edwin Njoka.

He was grandfather to Nora Njeri and Kwame Njoka. He was a cousin, uncle and friend to many.

Friends and relatives are meeting at his residents in Mwihoko.

Funeral Service will be held on Tuesday, 29/03/2022 at Kiandu Primary School From 11am and burial ceremony at his home.

2nd Timothy 4: 7 – Charles has fought a good Fight, He finished the race,and he kept the faith.