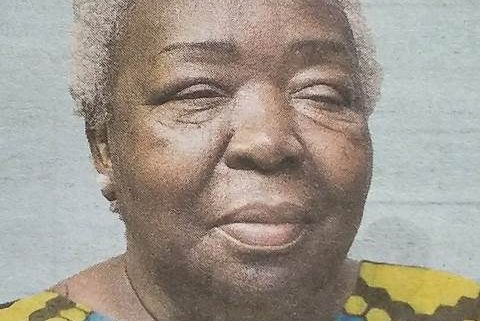 It is with humble acceptance of God’s will that we announce the death of Claris Awino Oduge on 12th August. 2022 while undergoing treatment.

Auntie of the Oduors, the Ongeks, the Oyamos, the Jeniphers, Elsa Akinyi among others. Mother-in-law of the late Tychus Obach, George Ong’ondo, Cedrick Adega, Frederic Vander Elst, Richard Were, Alice Shalli & Martha Barusi.

The cortege leaves Montezuma Funeral Home, Mbagathi at 6.00am on Saturday, 20th August, 2022 for last respect at her residence Uhuru Estate phase I from 7.00am, and thereafter departs from her residence at 9.00am for Committal Service and burial at Lang’ata Cemetery from 11.00am.

In God’s hands you rest, in our hearts you remain forever. Fare thee well Mama.