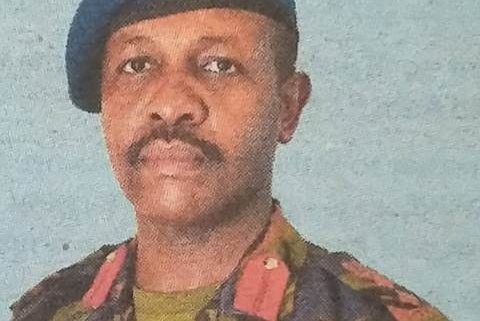 It is with great sadness and with humble acceptance of God’s will that we announce the passing away of Colonel Flavian Mwangi Waweru, Commandant, Kenya Airforce Training Wing, Moi Airbase, Eastleigh, Nairobi.

Meetings are being held daily at his residence, Royal Arcade Apartment, off Gitanga Road from 6:00pm.

A Requiem Mass will be held on Wednesday, 5th October 2022 at Our Lady of Assumption Catholic Church, Moi Air Base, Nairobi from 10:30am.

The cortege will leave Kenya Defence Forces Memorial Hospital Funeral Home at 7:00am for his Bitai Farm, Kariamu, Ol Kalou, Nyandarua County on Friday, 7th October 2022 for the final funeral rites and interment. The Funeral Mass will start at 9:00am.

“Eternal rest grant unto him, O Lord, and let perpetual light shine upon him.  May he rest in peace.”