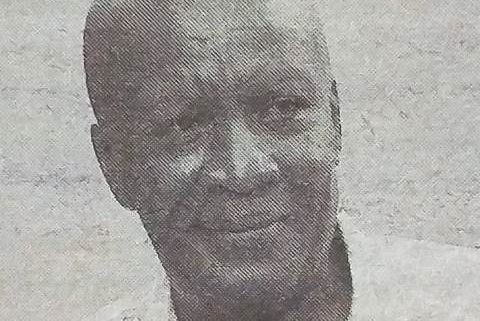 It is with heavy hearts and deep regret that we announce the sudden passing of Mr. David Muriithi Mahinda (Strong).

Muriithi was the son of the late Mr and Mrs James Nderitu Mahinda, Father to Muthoni Mahinda, daughter of Ruth Mwangi. He was the brother of Njeri Mbugua, Wanjiku Gikandi, the late George Wambugu, the late Aliki Mahinda,Warigia Mahinda and Muthoni Mahinda. He was a beloved Nephew, Uncle, Grandfather, Friend and a hilarious human being who will be sorely missed.

There shall be a viewing followed by a commemoration of his life at Montezuma
Funeral Home, off Mbagathi way on Thursday, 1st September, 2022 from 10.00am.

The funeral will take place in Ndurutu, Nyeri County on Friday, 2nd September, 2022.

Friends and family will be meeting at Impala Club on Ngong rd, at 6.00pm, from Monday the 29th August, to Thursday the 1st of September, 2022 for fundraising and funeral arrangements.