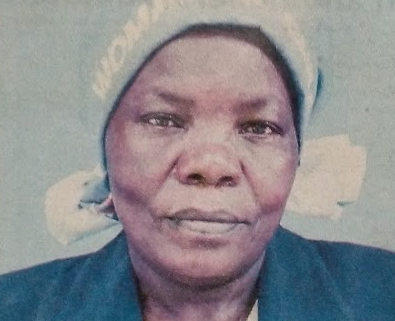 We regret to announce the death of Dorothy Ciagikuu Mwindi which occurred on Saturday, 16th April, 2022.

She was the daughter of the late Jason Mungiriria and Jane Jason, and a loving wife to Elias Mwindi.

She was a dear sister to the late Festus Mutegi, Esther Munari, the late Benjamin Mwenje, Bedford Ngai and Elsie Kanini and sister-in-law to Triza, Kainyu, Ciankui, Mbaka, Beatrice, Gitari, the late Kiarie and the late Gatuti.

Funeral arrangements are being held daily at her home in Mutuguni village, Tharaka-Nithi County, from 4 p.m.

A prayer meeting will be held at All Saints Cathedral, Nairobi, on Friday 22nd April, 2022 at 5p.m.

The funeral service will be held at PCEA Mutuguni Church from 11am after which she will be laid to rest at her home in Mutuguni village.