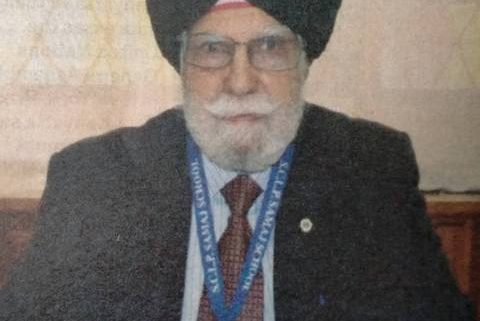 Dr Harbhajan Singh Gill passed away on Thursday September 17, 2020 while undergoing treatment at a hospital in Nairobi. At the time of his death, he was the Chief Principal at SCLP Samaj School & College in Nairobi. He has held this position since the establishment of the school in 1994.

Among many of his former students are prominent personalities such as the former Vice President De. Kalonzo Musyoka, former Chief Justice Dr. Willy Mutunga and the former Archbishop of the Anglican Church Rev. Dr. Benjamin Nzimbi. During his long and illustrious career, Dr. Gill was feted by leading organizations for his exemplary devotion to humanitarian services. The organizations that organized this work and feted him include: International Association of Lions Clubs (LCI), Universal Peace Federation (UPF), The United Graduate College & Seminary; USA, the Kenya Year Book 2013/2014 and SCLP Samaj Community (2019) for a life time Achievement Award – where he served as Chief Principal since its inception in 1994. Under his leadership, the school underwent tremendous growth with the student population rising from 27 in 1994 to over 3000 in 2020.

IN OUR HEARTS FOREVER

We pay tribute to an exceptional father, friend, educationist and mentor who served the school with insight, focus, love and dedication to the very last breath of his life. He was a great visionary leader who transformed the school from its humble origins in 1994 to a giant academic centre of excellence.

What we witness today is the sacrifice, hard work and deliberate effort of a guru who carefully chose and led a team of like-minded people in moulding the success of his students.

The most difficult task for anyone is to give a tribute to one of the greatest educationists of our time. Dr. H. S. Gill will be remembered as a very polished and focused school leader of his generation.

In a span of twenty-six years, he presided over the transformation of our institution to a modern and world class E-learning centre with a global reputation for top results in academics and co-curricular activities. His dedication, kindness, love for learners, steadfastness in achieving desired goals and spirited belief that every student has a window of opportunity to be successful has challenged and inspired all.