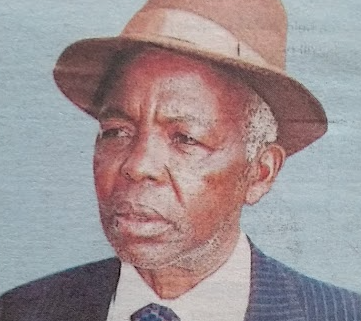 It is with heavy heart and humble acceptance of God’s will that we announce the promotion to Glory of Senior Elder Peter Muigai Nyanjui of Maingi, Kijabe.

Son of the late Nyanjui Ndungu and the late Waithera.

Step Brother of the late Wily Muigai, the late Waweru and the late Muthoni. Grand Father and great grand Father to Many.

Family and Friends are meeting daily at his Home in Maingi, Kijabe, and All Saints Cathedral at 5pm for Prayers and Funeral arrangements.

The cortege leaves AIC Kljabe Mission Hospital Mortuary on 19/4/2022 at 8am. The funeral Service will be held at AIC Grace Community Church Maingi thereafter the burial will take place at AIC Kijabe Mission Cemetery.

I heard the voice from heaven saying, “Write, ‘Blessed are the dead who die in the Lord from now on.” “Yes,” says the Spirit. “that they may rest from their labours; for their works follows with them.” — Rev 4-13