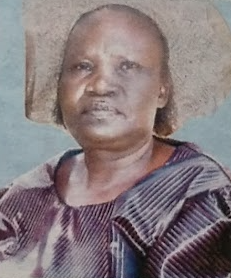 It is with humble acceptance of God’s will that we announce the death of Esther Atieno Oyoo (Nyasembo) which occurred on 3rd April, 2022.

Family members and friends are meeting daily as from 5pm in Kitengela and at her home in Nyahera Kandalo Village.

The cortege will leave Star Funeral Home on Wednesday, 20th April, 2022 at 4pm and the burial service will be held on 21st April, 2022 at her home Nyahera Kandalo Village, North West Kisumu Location, Bar A Sub Location.

” I have fought a good fight, I have finished my course , I have kept the faith”.