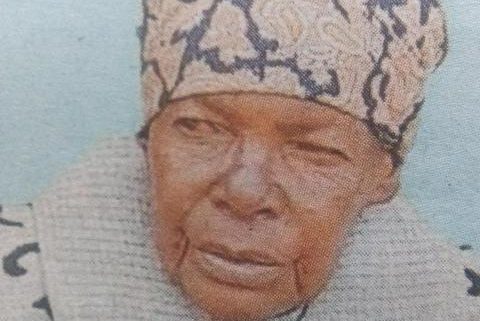 It is with humble acceptance of God’s will that we announce the passing to Glory of our matriarch, loving mother, doting grandmother and great Grandmother Esther Kathao Jakubu (Taata) on Tuesday 8th January, 2019 at Maua Methodist Hospital.

Friends and relatives are meeting daily for prayers at her home in Gichanine village from 6.00pm. Meetings in Nairobi will be held at CPF Annex Parliament Road next to Co-operative Bank, Turkana Hall on Monday 14th and Tuesday 15th January, 2019 from 5.30pm.

The cortege leaves J & E Funeral Home Kathatene on Friday, 18th January 2019 at 11.00am for a prayer service at Gichanine MCK Church from 12 Noon. Burial will follow thereafter at her home in Gichanine Village, Kangeta, Igembe Central, Meru County.

“I have fought a good fight, I have finished the race, I have kept the faith” 2nd Timothy 4:7