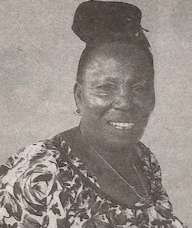 It is with humble acceptance of God’s will that we announce the passing on of Esther Wangechi Kiteto who was called to be with the Lord on 31/03/2022.

She was the fourth daughter of the late Douglas Kamunya and the late Ruth Wanja.

Funeral service and burial will be held at her home in Nyahururu, Mairo Kumi, Local-4 Village from 10am.

We love you mum.

You will eternally be in our hearts.