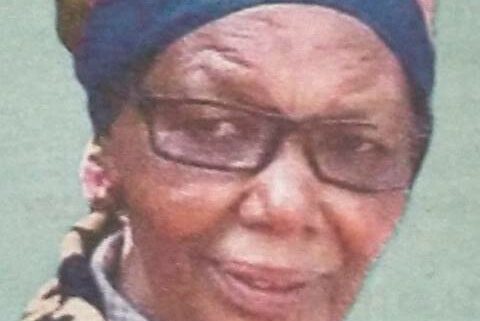 It is with deep sorrow and humble acceptance of God’s will that we announce thepromotion to glory of our mother and cucu Esther Wanjiru Mahinda which occurred on 31St October, 2022 at Consolata Hospital – Mathari.

Family and friends are meeting daily at her Gathare home for prayers and funeral arrangements from 3.00 m.

The cortege will leave Jamii Hospital Mortuary – Karatina on Wednesday, 9th November 2022 at 8.00am. Thereafter a funeral service will be held from 10.00am at Magutu Primary School grounds, followed by the interment at her Gathare farm in Gaikuyu Sub-location, Magutu Ward, Mathira Sub-county, Nyeri County.

In God’s hands you rest, in our hearts you remain forever. Fare Thee Well Mum, Cucu, Aunt, Mwalimu and Friend.