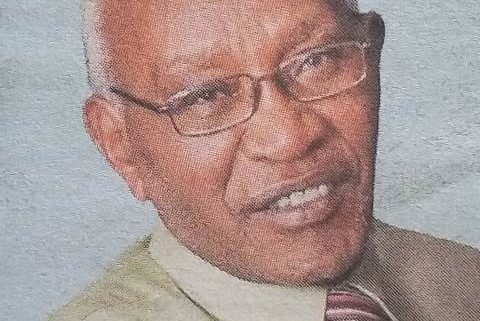 It is with profound sadness that we announce the death of Francis Mburu Robi (Chairman, Robico Chemicals) on Saturday, 4 June 2022.

He was the first-born son of the late Onesmus Robi and the late Hannah Wanjiku. He was son-in-law to the late Mr. and Mrs. Wang’ombe and to the late Gerald and Eliza (Shabe) Aritho.

Daily meetings are being held at Holy Family Basilica at 5:30pm, and at his rural home in Muhoho, Gatundu.

There will be a Requiem Mass on Thursday, 9 June 2022 at 1:00pm at Our Lady of the Rosary Catholic Parish, Ridgeways, Kiambu Road.

The cortege leaves Kenyatta Memorial Funeral Home (Northern Bypass) on Friday, 10 June 2022 at 8:30am. The funeral mass will be held at Muhoho Catholic Church at 11:00am, followed by burial at his home in Muhoho.

In God’s hands you rest; In our hearts you live forever. Amen.