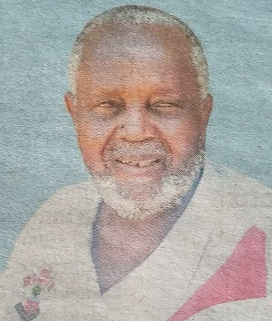 It is with humble acceptance of God’s will that we announce the promotion to glory of our beloved dad Mr Gati Chacha Formerly of Ministry of information which occurred on the 4th, April 2022.

He was born to the late Chacha Matango and the late Kegoocha Chacha.

Brother to the late Sabora Chacha, late Goore Chacha among others.

He was brother-in-law to Boke, Nyamohanga among others. He was father-in-law to Edina, Nyamboha, Alloys, Evelyn, Jacky, Hudson,Kibuko, Patrick and Alex.

Family and friends are meeting daily at his home at Naora village, Kuria, West.

Funeral service and burial will take place on Monday, the 18th, of April 2022 in his home, Naora Village, Kuria West, Migori County.