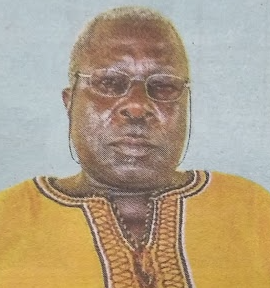 It is with deep sorrow and humble acceptance of God’s will that we announce the passing on of George Edwin Owino Okeyo (Adwera) of Kodero Village, Osewre, West Seme Sub-location in Kisumu, which occurred on 23rd April, 2022 after a long illness.

He was the son-in-law to the late Zebedee and Salome Omondi of Majiwa North Sakwa, Bondo.

He was the brother-in-law to Elida, Margaret, Jennifer, Joseph, Late Maurice, Rose, Plister, Late Rose Otieno, Wilda, Jane., Dorcas, among others. He was the father-in-law to Prof. Jane Ambuko of UoN, Mary and Isabella (Namasanda Primary school).

The cortege will leave the Star Hospital Mortuary on 6th May, 2022 at 12:00 followed by a memorial service at St. Barnabas ACK Church, Osewre, at 15:00hours.

The funeral service will be on 7th May, 2 from 10am at Osewre Primary School, followed by interment at his home in Kodero Village,  neighbouring Osewre Primary school), West Seme, Kisumu County.

Jesus said to her, “I am the resurrection and the life. He who believes in Me, though he may die, he shall live. John 11:25