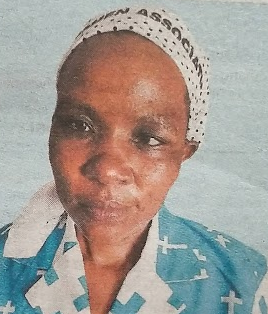 It is with deep sorrow and profound shock that we announce the sudden death of Gladys Nyaboke Machoka that occurred on the 29th July 2022. Wife to Geoffrey Machoka Ongera of Cosmopolitan Sacco – Nakuru.

The body is lying at Umash Funeral Home.

Friends and relatives are meeting daily at her residence Kiti,Teachers Nakuru and Lions Hotel (Rigena) Nakuru. A mini fundraising will be done 5th August 2022 at her residence, Kiti-Teachers, from 5.00pm.

The main fundraising will be on 7th August 2022 at Lions Hotel (Rigena) Nakuru. The Burial will be held on 12th August 2022 at Ng’ondu – Kikapu farm Njoro, (Opposite Egerton University Main Gate).

The cortege will leave Umash Funeral Home at 8.30am to her residence for body viewing and Mass will be conducted at St. Francis of Assisi Catholic Church Kiti same day.