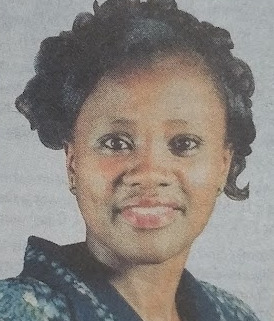 It is with deep sorrow that we announce the death of Irene Wanjiru Wangombe on 24th April, 2022. She was wife to Joseph Wangombe Thuo.

Mother to John Thuo and Rita Wairimu. She was daughter to the late James Githinji Kariuki and Mrs. Teresiah Githinji.

The meetings for funeral arrangements are being held daily at the Cardinal Otunga Plaza next to Holy Family Basilica from 5pm up to Friday, 30th April, 2022.

The funeral mass will be held at Mairo lnya Catholic Church Nyahururu at 11am followed by burial at their Mairo lnya family home.

2nd Timothy 4:7. I have fought the good fight, I have finished the race, I have kept the faith.