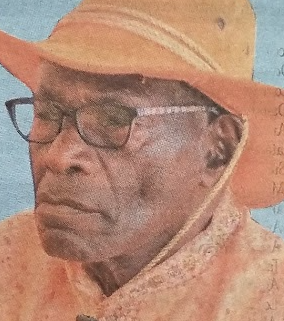 The Mesa family regrets to announce the Death and funeral of retired Teacher James Mesa Nyanusi of Mochenwa Nyabogoye village.

He was a founder member and first chairman of Gusii Mwalimu Sacco.

He is loving husband to Joyce Nyaboke. Son to the late Zacharia Nyanusi and the late Belia Magoma and Nyabate.

The cortege leaves Kisii Teaching and Referral Hospital on Thursday 31st March, 2022 for service at Mochenwa grounds at 3.00pm and burial at his home on Friday 1″ April, 2022. Venue for the Funeral will be at Nyabogoye Primary School, Nyamira County.