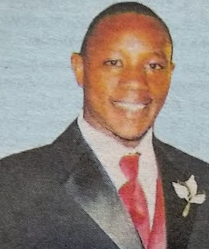 It is with humble acceptance of God’s will that we announce the death of James Mogaka Mweberi which occurred on 29th March, 2022 in Kansas USA.

Grandson to the late Nehemiah Mwencha and Late Esther Kwamboka, the late Zablon Isanda and the late Dina Nyabonyi.

Family, relatives and friends are meeting daily for prayers and funeral arrangements via zoom meetings in the USA and here in Kenya.

The fundraising is ongoing and donations and contributions can be sent through M-PESA No. 0724-043 971 (Benson Mwencha) and burial will be held on Friday, 22nd April, 2022 at their Tindereti home, Gesima Settlement Scheme.