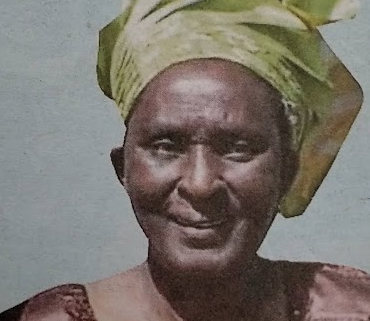 The family of the late Charles Kerina Kebaya wishes to announce the passing away of Mrs. Jane Kwamboka Nyang’anyi Kebaya on 19″ March, 2022.

Jane was a loving daughter, wife, mother, grandmother, sister, aunt and friend to many.

Jane was the wife to the late Charles Kerina Kebaya from Gianche village, Nyamira County.

Daughter in-law of the late Kebaya Kerina and Drucilla Bochaberi.

Sister to Geoffrey Omwenga, the late Mokaya, the late Beatrice, the late Charles, the late Yabesh, the late Georgina, among others.

Sister-in-law to the late Peter, Moraa, Rebecca,Alice, Nyabathe, Nyaboke, the late Hellen, the late Onyambu, Nyabwanga, the late Nyakoe, Esther, Mary, Linet, and Christine among others.

Aunt to the families of Mogoa, Onyambu, Kerina, Nyakoe and Omwenga.

Family and friends are meeting in Nairobi West (Nairobi) and at Gianche village (Nyamira County).

A memorial service is scheduled for Wednesday (30th March, 2022) at the Nairobi Pentecostal Church, Valley Road, from 2pm – 4pm.

The burial will be held on Friday ( 1st April, 2022) at the family home in Gianche village (Ikobe), Manga sub-County, Nyamira County.

“Peace I leave with you; my peace I give you. I do not give to you as the world gives. Do not let your hearts be troubled and do not be afraid.” — John 14:27