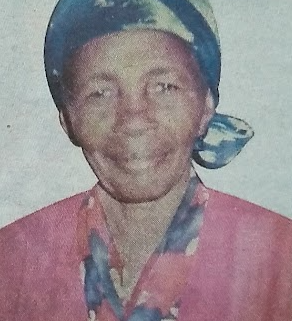 With the humble acceptance of God’s will, we announce the death of Katalina Mariam Kaingo which occurred on 12th April 2021.

Katalina was the daughter to the Late Mutia Makite and Late Syokuthi Muria. She was the beloved wife to the Late David Kaingo Muthoka.

The cortege leaves Chiromo funeral home, Nairobi at 7.00 am on Friday 22/4/2022 for her home at Kiluilu village, Kyanika, Kitui town for burial.

Family & friend are meeting at her home daily.