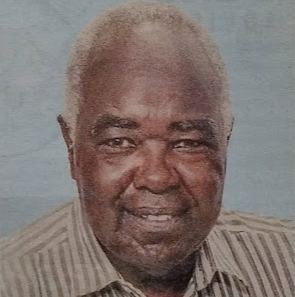 It is with profound sadness that we announce the demise of Mr Kerago Gecaga of Makuyu, Murang’a County.

He was a loving husband to Ruth Njeri Kerago and a loving father to Gecaga, Ngugi, Marika, Mbugua and the late Ngondo. He had 12 grandchildren and four great grandchildren.

The cortege will leave the Kenyatta Memorial Funeral Home, whose entrance is along the Northern Bypass on Thursday, 10th March, 2022 at 9am. The funeral mass will be held at the Don Bosco Makuyu Church at 11:00am followed by a private burial at his home.

Baba, you have left us a rich legacy worth emulating. Rest in eternal peace.