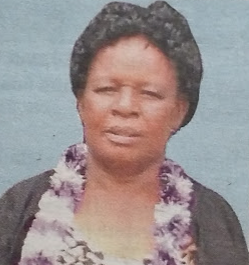 It is with deep sorrow and sadness that we announce the untimely demise of our beloved Madam Milkah Kemunto Paul who went to be with the Lord on 8th March, 2022 at the Kenyatta University Hospital.

There will be a funds drive to offset medical and funeral expenses on Mon 21st March, 2022 at Mosasa PAG Church and on Tuesday 22nd March, 2022 from 5.00pm at the Professional Centre, Nairobi.

The cortege leaves Chiromo Mortuary on Thursday 24th March 2022 with a memorial service set to be held on the same day at Nyamache PAG Church.

The burial will be on Friday 25th March, 2022 at Bonyang’ande village, Nyoera Sub-location, Nyamache Sub-county.