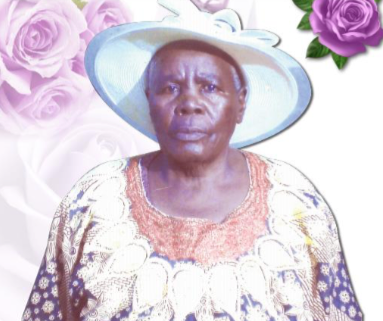 We, the family of the late Mama Dorcas Busolo Ligono, wish to express our sincere gratitude to everyone who stood with us in spirit and physical presence during the passing of our Matriarch Mother.

On the 26th of February 2020, she went to rest after bravely battling Diabetes and Hypertension for over 12 years.

We acknowledge the many expressions of love, kindness and support during the hour of bereavement. We are also truly grateful to everyone who supported Mum throughout the period she was battling the health conditions.

A special thanks is given to Friends Church (Quakers) and everyone who provided care in various ways including visits.

One of the gifts Mama cherished in her later days was the ‘Lighting of the Lamp’ by the United Society of Friends Women (USFW) in recognition of her exemplary leadership and service to the Church and Community at large.  She served on various Church Committees in addition to membership of the Church Choir that performed at many functions and won many accolades in the 1970s.

Mum is fondly remembered by her fellow congregants for her mantra: ‘Love, Humility, and Forgiveness’.

She was the daughter of the late Saul Litsalia and the late Rasoah Adamba.
Before her illness struck, Mama was full of energy and loved farming. She will be remembered for her generosity and kindness and for feeding many needy mothers and children.

Mother-in-law of Geraldine, Adelaide and Addah. She was a sister-in-law of Rebeccah, Rose, the late Rasoah Andeka, Anna Sitati, among others.

As we are unable to reach everyone individually, please accept this message as an appreciation of the love and comfort extended to us during the send-off.