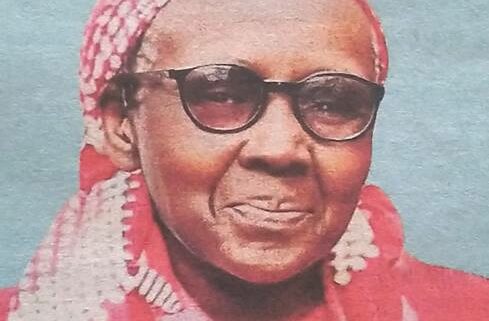 It is with deep sorrow and humble acceptance of God’s will that we announce the death of Mama Yunuke Kemunto Kebira which occurred on Wednesday, 16th November, 2022 at Kenyatta University Referral and Research Hospital.

She was a daughter-in-law to the late Mosirigwa Aencha, the late Bonareri and the late Moraa.

There will be a memorial service on Thursday, 8th December, 2022 at Lavington SDA Church, Nairobi from 2.00pm to 4.00pm.

The Cortege leaves Kenyatta University Referral Funeral Home on Friday, 9th December 2022, at 8.00am for burial at her home, Mwamonda Village on Sunday, 11th December, 2022.

“I have fought a good fight, I have finished the race, I have kept the faith.” 2nd Timothy 4:7