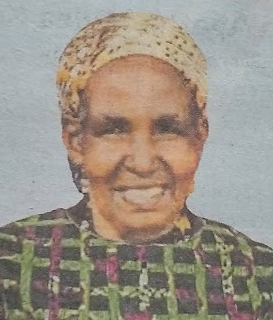 It is with humble acceptance of God’s will that we announce the passing on of Mary Mukami Mungai, which occurred on 31st July 2022, after a long illness bravely borne.

Friends and family are meeting daily at her home in Kihari Village, Kairo Location, Murang’a County.

The cortege leaves Kiriaini Mission Hospital on Saturday, 6th August 2022 at 8.00am for a funeral service at St Joakim Catholic Church, Kihari and burial to follow at her home.

MUM, YOU HAVE FOUGHT THE GOOD FIGHT, YOU HAVE FINISHED THE RACE AND KEPT THE FAITH. — 2 TIM 4:7