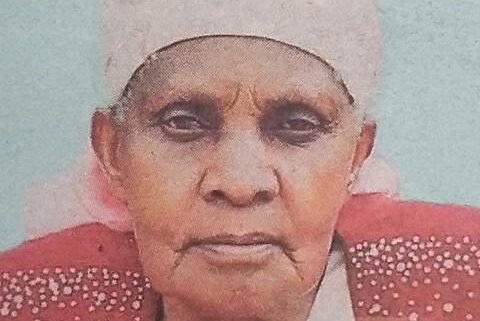 It is with humble acceptance of God’s Will that we announce the death of Mary Wanjiru Mambo (Mama Deborah) of Nakuru – Naka Estate.

Daughter of the late Joseph Njoroge Mwaniki and the late Esther Wangari Njoroge.

Meetings are being held daily at Nuru Palace Hotel from 4:00pm to 6:00pm.

The cortege leaves War Memorial Mortuary – Nakuru at 9:00am on 30/01/2023 for a Funeral Service at Nakuru ASK Show grounds, from 10:00am. Burial ceremony will be conducted thereafter at the Nakuru North Cemetery beginning 12:00pm.

John 1:25 —Jesus said unto her, “I am the Resurrection and the Life. She who believes in me though she may die, shall live. And Whoever lives and believes in me shall never die.