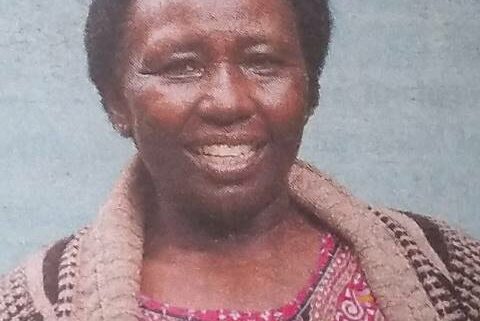 It is with humble acceptance of God will that we announce the death of Mary Wanjiru Ndung’u (Mama Karumbo) that occurred on Monday, 16th January 2023 after a long illness bravely bourne.

Daughter of the late John Karumbo Kiragu and the late Peninah Wambui Karumbo.

Mother to John and Purity Karumbo, Monicah and Nicholas Mukono, Peninah and Tayo, Josphat and, Naima Kimani,Thomas and Sally Njunge.

Friends and family are meeting daily at her Homes in Athiriver (Mutonguni Behind Corner view) and Kianganga Mitero village Gatundu North from 6.00pm for prayers and burial preparations.

A requiem Mass will be held on Monday, 231anuary 2023 at her Home in AthiRiver Mutonguni (behind corner view) from 6.00pm.

The cortege will leave Kenyatta University Funeral Home along Thika road on Tuesday, 24th January 2023 at 7.00am. Thereafter, the funeral service will be held at St. John Catholic Church Mitero, Mangu Gatundu North beginning at 10.00am. Burial will follow thereafter at her farm in Kianganga.