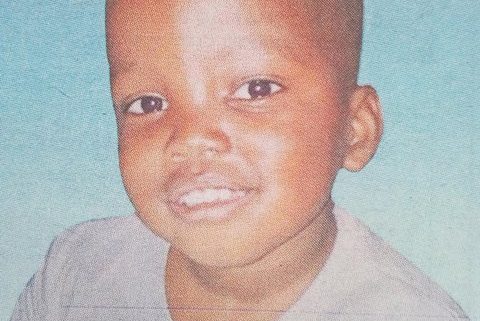 It is with humble acceptance of God’s will that we announce the passing on of Master William Muuo Wambua on 8th of July, 2019 after a short illness.

All committees, relatives and friends will converge for fund raising on Wednesday 17th of July, 2019 at 680 Hotel Nairobi to offset funeral and other expenses starting at 5:30 pm.

The cortege will leave Montezuma funeral home Nairobi, on Friday 19th July 2019 at 6:00 am. There will be a requiem mass at Ngumbau Primary School grounds starting 1:00 pm and thereafter the burial ceremony will follow at their adjacent rural home Ngumbau area Ikaalasa Location, Mwala Sub- County, Machakos County.

“In God’s Hands you rest, in our hearts you remain forever “Amen