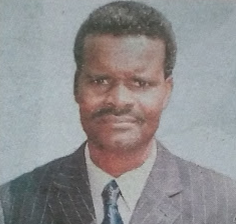 It is with deep sorrow and humble acceptance of God’s divine will that we announce the passing on of Mwalimu (Retired) Francis Maina Kabugu on 28th December 2021 after a long illness bravely borne.

He was the chairman for KEPSHA Nyandarua South. He was the son to the late Douglas Kabugu Kimani and Sophia Wanjiku Kabugu.

He was Husband to Ann Warima Maina, father to Paul Ndonga Caroline Wanjiku and the late Margaret Wambui. Grandfather to Annita Warima Ndonga among others.
He was son-in-law to the late Paul Ndonga and the late Consolata Wanjiku from Giakanja in Nyeri. He was brother inlaw to Warima Gitahi, Karuru, the late Kariuki, Githungo, Bauni, Ndegwa, the late Thuita, Wairimu Njuki and Nyawira Chege.

Family and friends are meeting daily at his residence in Kitiri Village, Kinangop-Nyandarua.

The cortege leaves North Kinangop Catholic Hospital on Tuesday 4th January 2022 at 9am for the funeral and burial service from I lam at his residence in Kitiri Village.

As a father you were neither an anchor to hold us back nor a sail to take us there, but a guiding light whose love showed us the way.