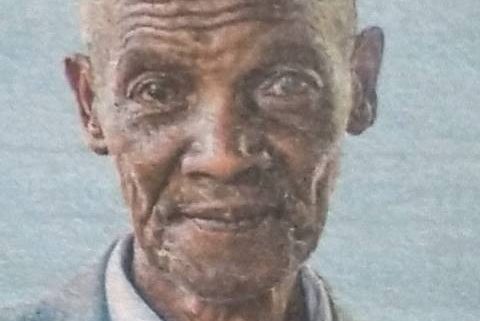 It is with sorrow and humble acceptance of God’s will that we announce the promotion to glory of Nathaniel Njoroge Muhoya of Kariani location, Kinangop Sub county, Nyandarua County.

He is also a great grandfather to many. He was a darling daddy, uncle and cousin to many. Extended family include; The Muiruris’, Gachohis and Ndutas’. He was a friend to many.

Family and friends are meeting daily for prayers and burial arrangements at his farm in Kwa Nguruka village, Galana Suites Kilimani and Githunguri Utawala.

The Cortege leaves Engineer Level 4 Hospital (Nyayo) on Friday 7th October 2022 for a requiem mass and burial ceremony at his home from 10.00am.

Guka: you will forever be in our hearts.

Revelation 14:13 ….I heard the voice from heaven saying,`Write,`Blessed are the dead who die in the Lord from now on:” “Yes,” says the Spirit,”that they may rest from their labors; for their works follow with them.”