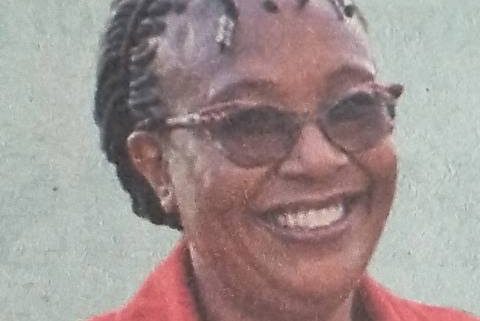 We regret to announce the death of Olive Nyambura Kabaa of Kenya Power, Mombasa, which occurred on Monday, 12th September, 2022 at Coptic Hospital, after a short illness.

Mother to Eileen Wangui and grandmother to Olive Nyambura.

Sister to Richard and Jane Njoroge, Esther and the late Patrick Kamau, Peter and Elder Nellie Mumira, Hannah and the late Geoffrey Gathinji, Dorcas and the late David Muigu and Alex and the late Beatrice Kuria. Grandmother, Aunt and Cousin to many.

Family and friends are meeting at the Gitaru residence and PCEA, Makupa daily for prayers and funeral arrangements.

A Memorial service will be held on Monday, 19th September at 5.00pm at PCEA, Makupa, Mombasa.

The cortege leaves PCEA Kikuyu Hospital Mortuary on Tuesday 20th September, 2022, at 9:00 a.m. for a funeral service at 10:00 am at PCEA Joseph Ngwaci Memorial Church. Thereafter, she will be laid to rest in the family home in Rungiri, ltanga.

2nd Timothy 1:7 “For the Spirit God gave us does not make us timid, but gives us power, love and sound mind.”