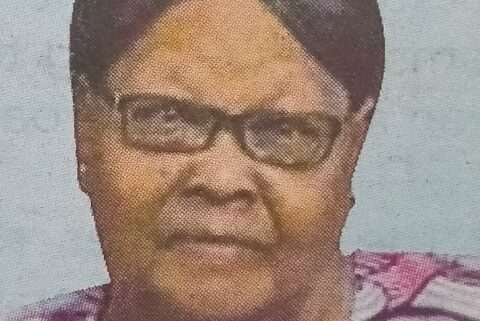 We regret to announce the death of Mrs. Pasquelina Nyokabi Ndung’u (Mama George), which occurred on Monday 9th January, 2023.

Daughter to the late Eusebius Ndirangu and the late Martha Njeri.

Sister to the late Raphael Kahiga-Njengu, the late Mathew Muhanda-Kamuyu and Mary Wanjiku-Kamakwa. Sister-in-law to the late Gladwell Wangui, the late Grace Nyaruai, the late Paul Muruthi and the late Joseph Gitonga.

Family and friends are meeting every evening at her residence at Nyali, opposite KFC.

There shall be a requiem Mass on Wednesday 18th January 2023 at 2.00pm at the Holy Ghost Cathedral – Mombasa, followed by the burial Mass in Nyeri, Mweiga Catholic Church on 20th January, 2023 at I 1.30am.