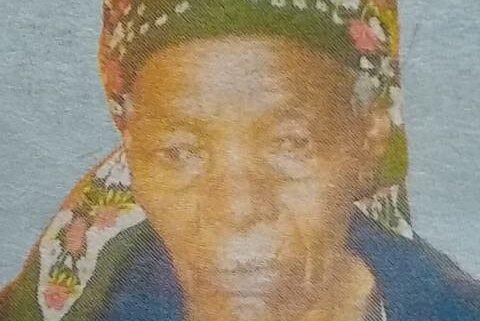 We are deeply saddened by the death of Peris Nyabiage Onwonga, which occurred on 8th January 2023. Peris hailed from Esise Village, Ekerubo Location, Borabu Sub-County of Nyamira.

Daughter to the late Mangiaa and Mosubi. Sibling to Rebecca Moraa and the late Samuel Ochomba.

Peris was wife to the late Onwonga Kenga.

Peris was mother to Hellen, Mary, Isaac, Peter, Yabesh, Billiah, yuvline, Naomi, Ben and Duke. Peris has been survived by many children, grandchildren and great grandchildren.

The late Peris cortege will leave Nyansiongo Funeral Home on 12th January 2023 to her home in Esise Location, Nyamira County where she’ll be laid to rest on 13th January 2023.

“Do not stand at my grave and weep, I am not there, I did not die. I’m the soft star that shines at night”