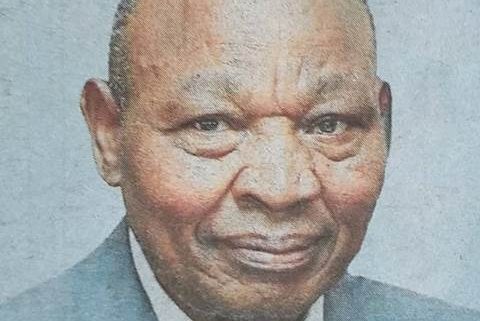 We are saddened to announce the death of Mr. Peter Kiunga M’Mungania (former Councillor of Milimani Ward, Meru County), which occurred after a long illness, on Tuesday October 4th, 2022.

Son to the late Margaret Kangai Ciokarumba and Joseph Munene M’Mungania. Brother to the late Gideon M’Manene and Francis M’Mugambi and several other siblings.

Son-in-law of the late Samson Kahura Kiriinya and the late Sarah Mwarania Kiriinya. Brother-in-law to the late Gitobu and Jane, the late Joyce and Zakayo Mugo, the late Kaguri, Isaac and Florence Kiriinya, Esther and the late Mbaabu, Henry and Joyce Mbaabu and several other in-laws.

Family, friends and relatives are meeting daily at his residence in Donholm Estate, Nairobi.

There will be a thanks giving mass on Thursday, October 13th, 2022 at 11:00am at St Jude Catholic Church, Donholm, Nairobi.

The cortege leaves Kenyatta University Funeral Home on Friday, October 14th, 2022. The funeral service will be held on the same day at St. Joseph’s Cathedral – Meru Town at 10.00am and thereafter proceed for the burial at his home in Meru, Naari location, Muruguma village.

May God rest his soul in eternal peace.