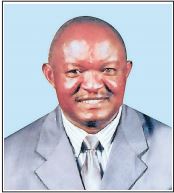 It is with great sadness and acceptance of God’s will that we announce the untimely death of Mr. Peter Makori Nyamweya of Lasit Factory (Nakuru) and formerly Unilever Tea, which occurred on 23rd July 2018 at Bristol Park Hospital Utawala.

Friends and relatives are meeting daily at his Nairobi – Utawala residence, his rural home Marani, Kisii and at Antonio’s (Nairobi CBD) at 5.00pm. There will be a major fundraising for the funeral on Tuesday 31st July 2018, at All Saints Cathedral 5:00pm. Contributions can also be sent to PAYBILL NUMBER 961346, Account name (PNYAMWEYA FUNERAL FUND).

The cortege leaves Umash funeral home on Thursday 2nd August 2018 for a church service at Consolata Shrine at 8.00am. The burial shall be on Friday 3rd August, at his home in Kiomooncha Marani, Kisii

John 11:25-26 “Jesus said to her I am the resurrection and the life. He who believes in me, though he may die, he shall live. And whoever lives and believes in me shall never die.”