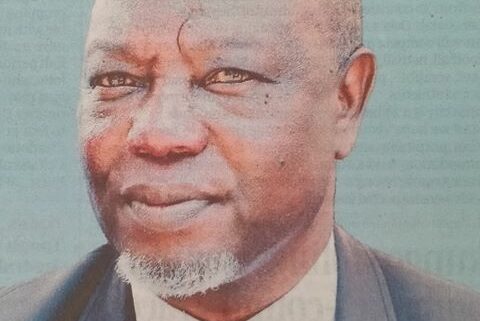 We regret to announce the death of Retired Commissioner General of the Kenya Prisons Service Isaya Mosiori Osugo O.G.W, C.B.S of Bondonya, Nyangusu Sub-location of Kisii County, which occurred at Nairobi Hospital on Monday 9th January 2023, after a brave fight with cancer.

Brother to Norah, Grace, Zephaniah, Jane, the late Josephine and the late Zipporah.

Uncle to Josephine, Bernard, Matoke andYunia among others.

Father-in-law to Pamela, Isaiah, Leonard, Betty, Cody (AUS) among others.

Brother-in law to the late Onyancha, Machoka, Elizabeth, the late Omwange, Samuel, Solomon (USA) among others.

Cousin to the late Ongera, Samson (USA), Giddeon (KDF), the late Jacob among many others. He was a friend and colleague to many.

A fundraising will be held on Tuesday 17th January 2023 at the 680 Hotel from 5:00 pm. Contributions can be sent to Paybill 8103174 (lsaya Osugo Fundraising) with your name as the account number.

“You have fought the good fight, you have finished the race and you have kept the faith” 2nd Timothy 4:7