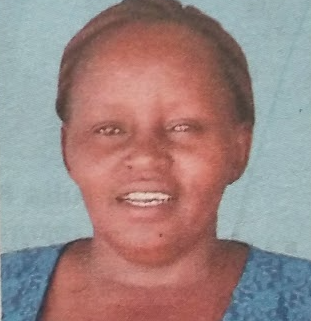 It is with humble acceptance of Gods will that we announce the passing on of Rose Wanjiru Mundia, which occurred on 25th March, 2022 at The Nairobi Hospital, after a long illness.

Until her demise, she was the District Irrigation Officer Kirinyaga Central in Kirinyaga County.

Beloved daughter to the late Sospeter Ndege and Charity Ndege and Betha Ndege.

Daughter-in-law to the late Evan Njue and the late Beatrice Wacuka.

Grandmother to Sheila Blessing Wanjiru. Sister, Auntie and Cousin to many.

Friends and family are meeting daily at 4pm at her home in Kagumo, Kirinyaga, Kimbimbi and Wanguru Forest Inn – Mwea.

The cortege will leaves ACK Mt. Kenya Funeral Home on 1st April, 2022 at 10am for a requiem mass at ACK St. Peters – Kamuiru Church at 11am thereafter the body will be laid to rest at her home in Kagumo, Kirinyaga County.

2nd Timothy 4:7 ” I have fought the good fight, I have finished the race, I have kept the faith.”