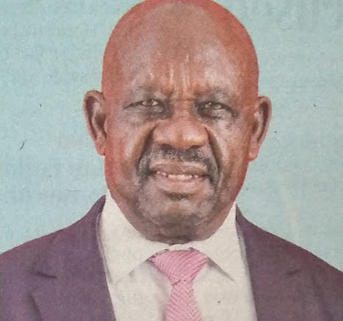 It is with humble acceptance of God’s will that we announce the passing on of Samuel Kibowen Towett former Mayor, Nakuru, following a short illness bravely borne.

He was son to the late paramount chief Kibowen Chesang’ and the late Talaa Kibowen.

Brother to Tungo Murefu, Daudi Kibowen and others. Mzee was blessed with 26 grandchildren and 2 great grand children.

The cortege will leave Umash Funeral Home on 25/03/2022 at 8:00am for a funeral service which will be held at his Sobea Home.

Family and friends are meeting daily at the Chambers Resort, Nakuru, at 4:00pm for prayers and funeral arrangements.

“I have fought a good fight, I have finished my race, I have kept the faith and now there is laid up for me a crown of righteousness which the Lord will award me.”