“I realized it’s something that may not happen for many queer people in Kenyan society that open gesture of welcome. That really moved me, so I wanted to use the medium of the khanga to celebrate our love.” Sheila Kawira Mwirichia. 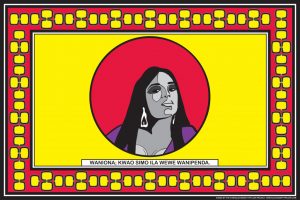 One of the Kangas designed by Sheila Kawira Mwirichia, LGBTQ activist.

Sheila Kawira Mwirichia died aged 34 years. She was born and raised in Nairobi.  Kawira received her Bachelor of Civil Engineering from the University of Nairobi (Aug 2007 – Dec 2012).

She was a proud queer female visual artist. She loved to create beautiful art with an aim of changing the world as far as LGBTQ was concerned. Through the Astraea Commslab, Mwirichia she took a course for online LGBTQI activism. Her formal art training came from graphic and web design courses at the Institute of Advanced Technology as well as Nairobi Institute of Business Studies.

To achieve her dream, Kawira started a project which she called To Revolutionary Type Love. The project was for celebrating the queer community. This was done through a traditional cotton cloth kanga.  She was inspired to start the project after attending a friend’s wedding in 2015.

In this wedding, and as per the cultural background of that family, the groom’s family went to the bride’s home to pick her up and take her to her new home.

They led her out of the home and placed kangas on the ground for her to walk over as they were singing and welcoming her to her new family. This hit her that the gesture wouldn’t be experienced by queer people in Kenya because of homophobia.

“The fact that straight people get to have their love celebrated so openly and so freely by their family, and yet we have to hide who we are really moved me. I thought we could celebrate ourselves by creating our own kangas with our stories written on them and lay them out for ourselves,” she once said.

The kangas told stories of the queer movement in Africa. One of her creations featured the faces of David Kato, Uganda’s fallen LGBTQ activist (who was murdered at his home on 26th January 2011) and Kasha Jacqueline Nabagesera, one of the pioneers of Uganda’s LGBTQ movement.

Kawira’s body was in the evening of November 3rd, 2020. The decomposing body was found inside her Lavington residence, Nairobi.

She had been reported missing a few days back. Attempts by friends and family members to locate her had been unsuccessful.

However, after a long search, Sheila’s body was spotted by a caretaker where the deceased lived. According to the caretaker, he felt some strange smell emanate from Mwichiria’s house. It is then that he informed neighbours who came to witness what was happening.

Together with police officers, they broke into the door only to be met by the sad reality of Sheila’s body lying on the floor.