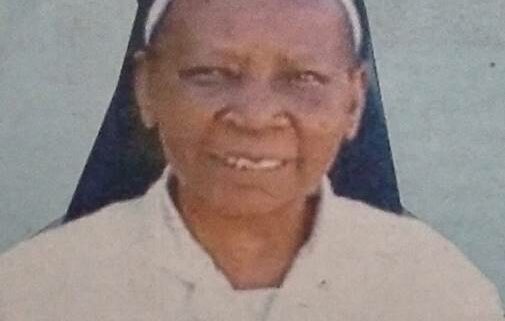 It is with profound sadness, that the Sisters of Mercy and the Family of the late Nesphor Kiuvu wish to announce the death of Sr. Jeniffer Nzilani (Nzembi) Kiuvu that occurred on 23rd December 2022.

She was a dotting grandmother to Vinnie, Valerie and Angel.

Sr. Jeniffer joined the Sisters of Mercy in 1976 and has taught in schools such as Kibwezi, Kivandini (Makueni); St Elizabeth’s, St. Anne’s (Nairobi); Ndarugti (Moro), Nuu and Mutomo (Kitui).

There will be a Requiem Mass at the Mater Misericordiae Hospital Chapel on 4th January 2023 at 3.00pm.

The cortege leaves the Mater Misericordiae Hospital Mortuary on Thursday 5th January 2023 at 7.30am for Funeral Mass at St Austin’s Catholic Church at 10.00am, ‘Thereafter, internment at Sr. Mary’s Cemetery in Msongaria.

Each day is a step we take towards eternity (Catherine McAuley).

Rest in peace Jeniffer until we meet again.