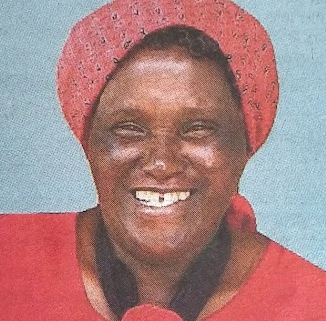 It is with humble acceptance of God’s will that we announce the demise and promotion to glory of Mrs Susana Wanjiku Kagunda of Eldama Ravine, which occurred on 3rd April, 2022, after a short illness.

Daughter to the late Mwangi Kariuki and the late Beth Wanjiru. Beloved wife to the late Kiriba Kagunda.

Sister in law to the late Shadrack Muriithi, the late Herman Gathege and the late Paul Muraya.

Family and friends are meeting daily at her home in Mawanga, behind Vineyard Hotel at 6pm.

The funeral service will be held at Kunste grounds on Friday, 22nd April 2022 starting at 10am.

(2nd Timothy 4:7) “I have fought the good fight, I have finished the race and I have kept the faith.”