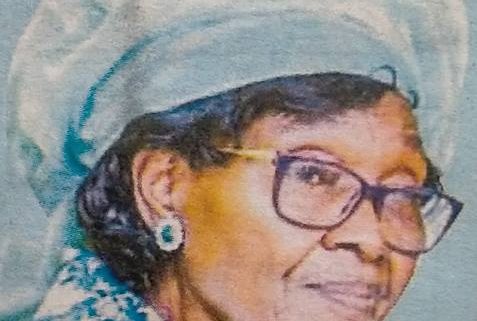 It is with deep sorrow that we announce the death of Twyla Rose Nyandiko Otolo HSC, wife of the late Weston Yosi Otolo, and former proprietor of Emasaaba Welcome Enterprises, which occurred on Sunday, 3rd July 2022. The body is lying at Montezuma Funeral Home.

Daughter of the late Isaiah Muchilwa and the late Phoebe Olesi Muchilwa.

Sister to the late Niva Asila, the late Samuel Liselo, the late Rachel Anaminyi, the late Besi Abwanzo, the late Rebecca Anjeho, the late Mabel Odera and the late Hon. Sheldon Muchilwa. Treasured aunty to all their children.

Basakwa to John and Joina Chebukati.

Family and friends are meeting daily at the United Kenya Club from Wednesday 6th July at 6.00pm to 8.00pm.

A fundraising event to cover funeral costs will be held at the same venue in Nairobi on Tuesday, 12th July, 2022 from 6.00p.m.

The cortege will leave Montezuma funeral home on Thursday 14th July 2022 at 12.00 pm for a funeral service at Mariakani Christian Centre South B from 12.30pm and thereafter proceed for an overnight stay at the family residence.

Her cortege will leave for her rural home Epan’ga, Vihiga County on Friday, 15th July, where she will be laid to rest on Saturday, 16th July 2022.

The family seeks your prayers and support in according the late Matriarch a befitting send off. Contributions can be sent to the following pay-bill Pay-bill Name — Otolo Rose Twyla Farewell Pay-bill Number — 8045887 —-Account Number — Name of contributor.

The Lord gave, and the Lord has taken. Blessed be the name of the Lord.