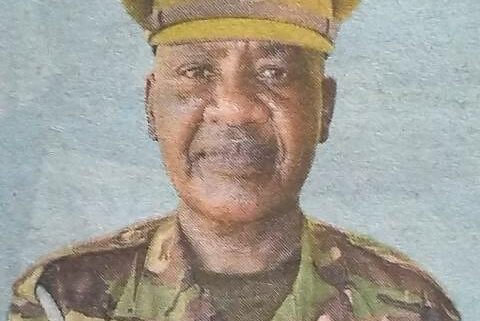 It is with profound sadness and humble acceptance of God’s will that we announce the death of WO I – (Warrant Officer I ) Dominic Makau of Signal Battalion, Kahawa Barracks.

He was son-in-law to the late William Musembi and Rael Musembi of Kalama, Machakos.

Grandfather to Tyrone Makau. Uncle and Cousin to many.

Family and friends are meeting daily at his home in Katulu, Nguluni.

The cortege will leave Mashujaa Funeral Home at Forces Memorial Hospital on 3/1 2/2022 at 0800hrs for burial at his home in Katulu, Nguluni, Matungulu West, Machakos.

2 Timothy 4:7 I have fought the good fight, I have finished the race, I have kept the faith.

In God’s hand you rest and in our hearts you live forever.