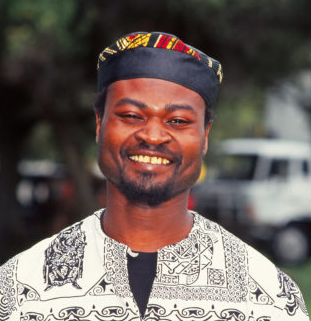 Ayub Ogada, the Kenyan musician who exported the Nyatiti – a Luo eight string instrument – to the West and spent years in England as a busker, has died. He was 63.

Widow Yvonne Seda told reporters the legendary musician had been sick. Most of his songs were performed with the Nyatiti.

Musician Suzanna Owiyo eulogised Ogada on her Twitter account saying: “Ayub Ogada, respect wuod Luo. You are the reason I picked Nyatiti. Thank you for sharing this fantastic 8 strings instrument with the world. I celebrate you! Rest in Power.”

Ogada regarded, in the West, as one of the greatest Kenyan artists of all time. He was born in 1956 in Mombassa as Job Seda. At six, his parents took him to Chicago, where his father, Dr George Ouko Seda, was studying medicine. Ayub recalls meeting Muhammad Ali (then Cassius Clay), and experiencing the aftermath of American segregation. His parents toured college campuses performing Luo music at a time when the term ‘world music’ was unknown in commercial circles.

“When I went back to Kenya”, Ayub once recalled, “I had to relearn my language and some of the vernacular. Going to America was a culture shock, but going back to Kenya was another.”

While attending Catholic school in Nairobi, he played in a band called Awengele, and began experimenting with indigenous instruments. While in high school and performing in a rock band called Black Savage, he composed Kothbiro, an adaptation of a traditional song that would eventually wind up on his album En Mano Kuoyo. Ayub’s evident musical talent led to a position at the French Cultural Centre in Nairobi, where he composed modern and traditional music for theatrical productions.

In the 1970s, Kenya was awash in foreign music: Congolese ‘rumba’, soul and R&B, jazz, Latin pop, and even country & western. Local benga and other guitar-based dance music styles had their followings, but the traditional music of Kenya’s more than 30 ethnic groups remained largely confined to villages and private settings.

“I lived a lot in the city and found it very difficult to have access to traditional music. Even Europeans have more access. An African would be considered suspect: ‘Why are you here looking at my tribe?’ These things were planted in people’s minds in the last 100-400 years.”AYUB OGADA, 1993

Ayub’s life changed in 1979 when he became a co-founder of the African Heritage Band. His mentor and partner in this was an American, Alan Donovan, director of the Pan African Gallery. Donovan still lives in Nairobi, working on behalf of indigenous culture, and he recalls that his one requirement for African Heritage musicians was that they compose music, not copy it, and that they use African instruments and content in their songs. To this day, Ayub remains thankful for Donovan’s guidance, saying, “I would be nothing without this man.”

Over the next six years, Ayub recorded two albums with African Heritage (Niko Saikini and Handas), toured Europe, and appeared in a series of films, notably Out of Africa and The Kitchen Toto, in which he played a Mau Mau heavy. Ayub observed the success that such African musicians as the Ghanaian band Osibisa, were having in Europe, so in 1986 he moved to London, where he quickly became a mainstay of the local African music scene.

In the original notes for En Mano Kuoyo, Rick Glanvill wrote, “Ayub played in the promising but occasionally volatile rumba band Taxi Pata Pata, along with guitarist Zak Sikobe, whom he had grazed knees with back in Kenya. Ayub sought solace in busking-Northern and Victoria Lines, mostly. You’d hear the repetitive cat’s cradle of notes on the lyre-like nyatiti echoing enticingly down the tunnel at Finsbury Park tube. You’d see a tall, bowed man seated on a bright pretty cloth, his head cocked, nodding, his eyes glazed by the spirit of his busy-fingered playing. And, more often than not, you’d chuck a nicker in his hat.”

Ayub’s principle instrument, the nyatiti lyre, is considered to be a woman. “When you start to play this instrument, you practically get married,” he once said. “She won’t like you to play another instrument. You play, and you enter a contract, and you have to be serious. Suits me fine; I’m happily married.”

The nyatiti is used in spiritual practice and to sing historical praise songs. But it it can also accompany humorous Luo songs, peppered with puns and proverbs, as well as songs delving into social realities. In short, it is a complete package, so it is no surprise that Ayub remains faithful to it to this day. In 2005, he performed at Live 8 in Eden, playing the Golden Lyre of Ur, recently reconstructed after the original was damaged in Baghdad. The instrument featured on En Mano Kuoyo was built especially for Ayub in Kenya, and he said at the time that it cost him “the earth.” Ayub also expressed a certain ambivalence about introducing this ancient, venerable instrument into modern technological settings. “I can’t stand sampling,” he said. “I don’t want someone to sample the sound and then start playing it on keyboards, though I wouldn’t mind controlling the keyboards through my nyatiti!”

Ayub’s nyatiti concerts in the London underground eventually led to an invitation to perform at WOMAD in Cornwall in 1988. When a band cancelled, Ayub’s ten-minute slot became a full set, and among the converted that day was Peter Gabriel himself. After Ayub participated in one of the legendary “Recording Weeks” at Real World in Box, Wiltshire, more work with Gabriel and with Real World was assured, and the creation of En Mano Kuoyo was only a matter of time.

The concept of Yin and Yang is important in Luo culture. A proverb says, “Inind tung’, inind diere (one day you sleep on this side, the next you sleep on the other).” Today, once again, Ayub sleeps in Africa, and as he watches the world and perfects the songs for a long-awaited follow-up to his album, he is unhappy with the direction of the world and its leaders. “Kenya is not my country,” he says. “My country is Africa. And if I look at it properly, my country is the world. So right now, we re-create history, and fix people in their places. I refuse to be fixed.”