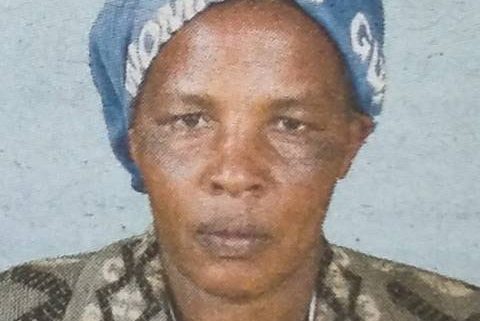 It is with humble humility and acceptance of God’s will that we announce the untimely death of Beatrice Muthoni Gathima (Mama Mukami). Wife to the late Wilson Gathima Muiga which occurred on 23rd September 2022 at Kenyatta National Hospital.

Daughter to the late Gerald Nderitu Njuguna and Joyce Nyaguthii Ndiritu. Beloved Mother to Purity Mukami of Nairobi, Andrew Muiga of Nairobi, Edward Ndiritu of Mombasa and Gilbert Gathigi of Nairobi. She was a grandmother to many.

Mother in love to Engineer Joel Wairua, Irene Wangui and others.

Friends and relatives are meeting daily at her rural home at Gikoe Village and also at Homeland hotel along Thika road for burial arrangements.

The cortege leaves Montezuma Monalisa Funeral Home at Kabati along Thika-Nyeri highway on Friday 30th of September 2022 at 7a.m. There will be a requiem Mass at P.C.E.A Munyange Church thereafter body will be laid to rest at her home in Gikoe Village Mahiga, Othaya, Nyeri County.